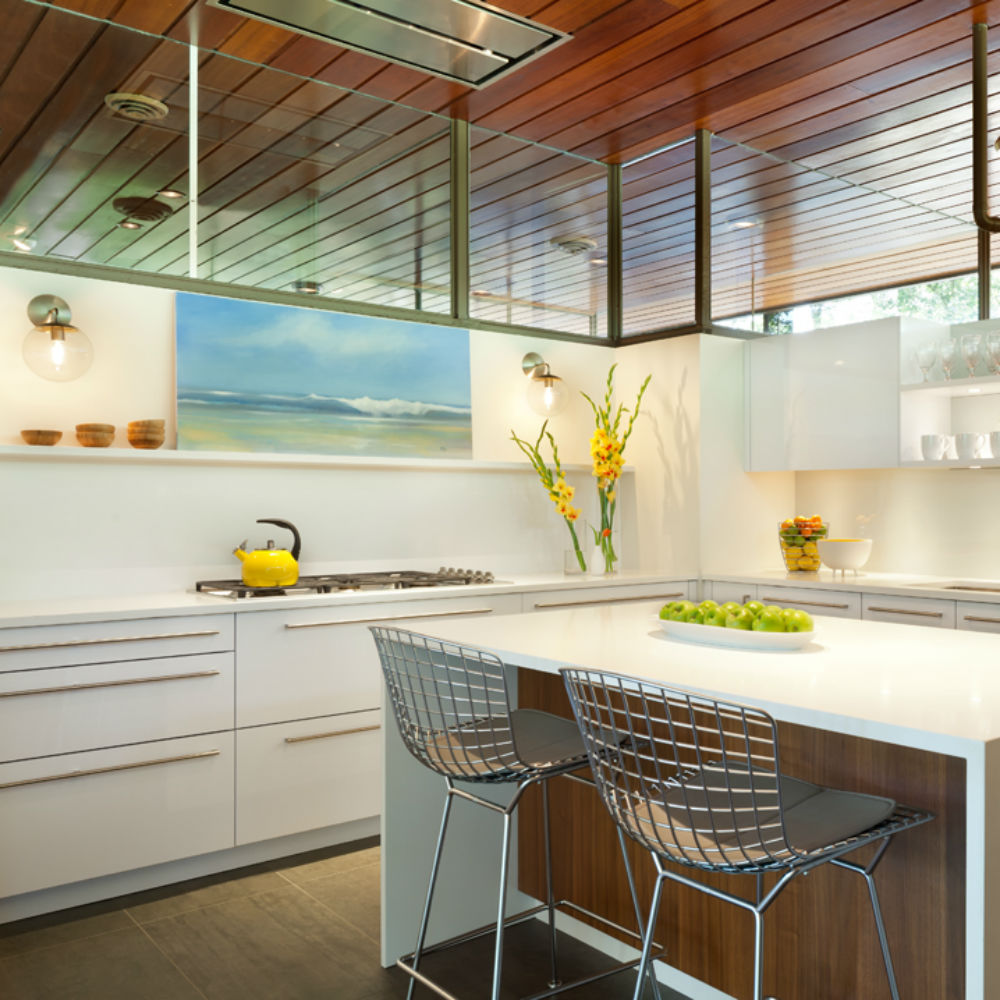 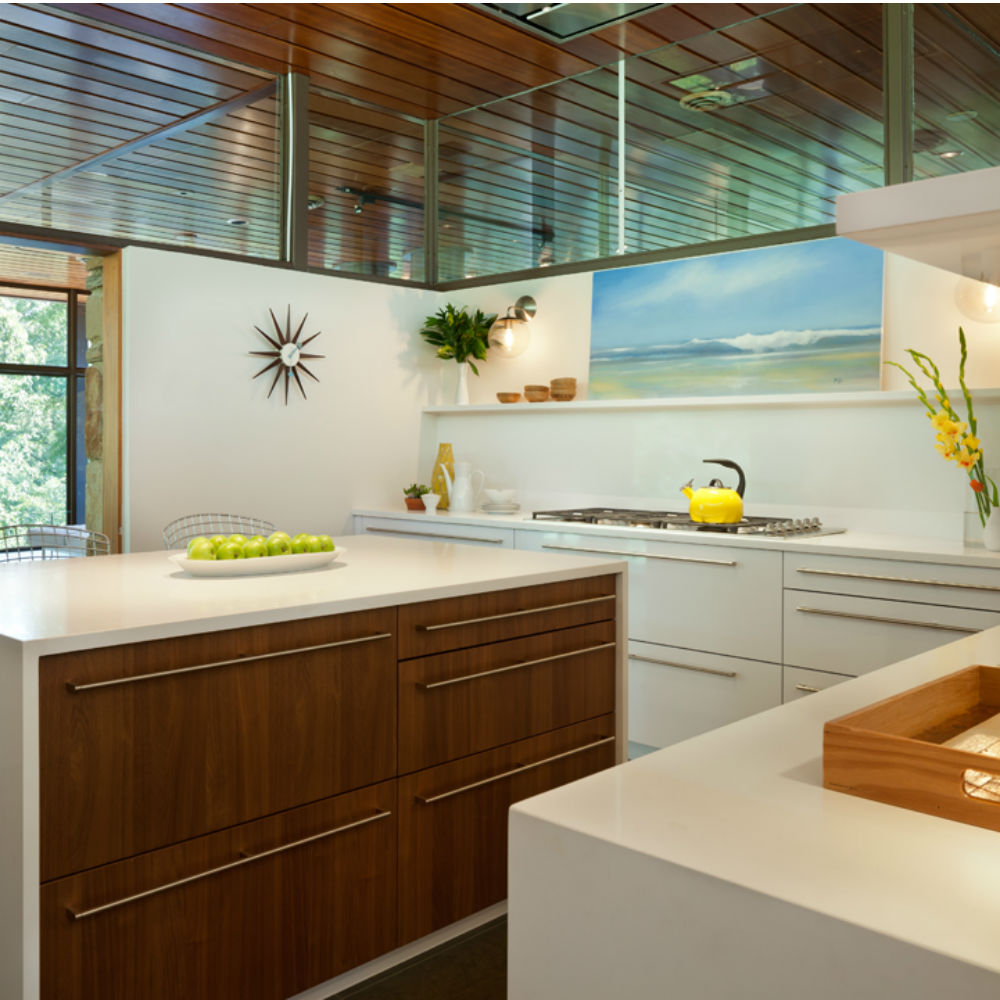 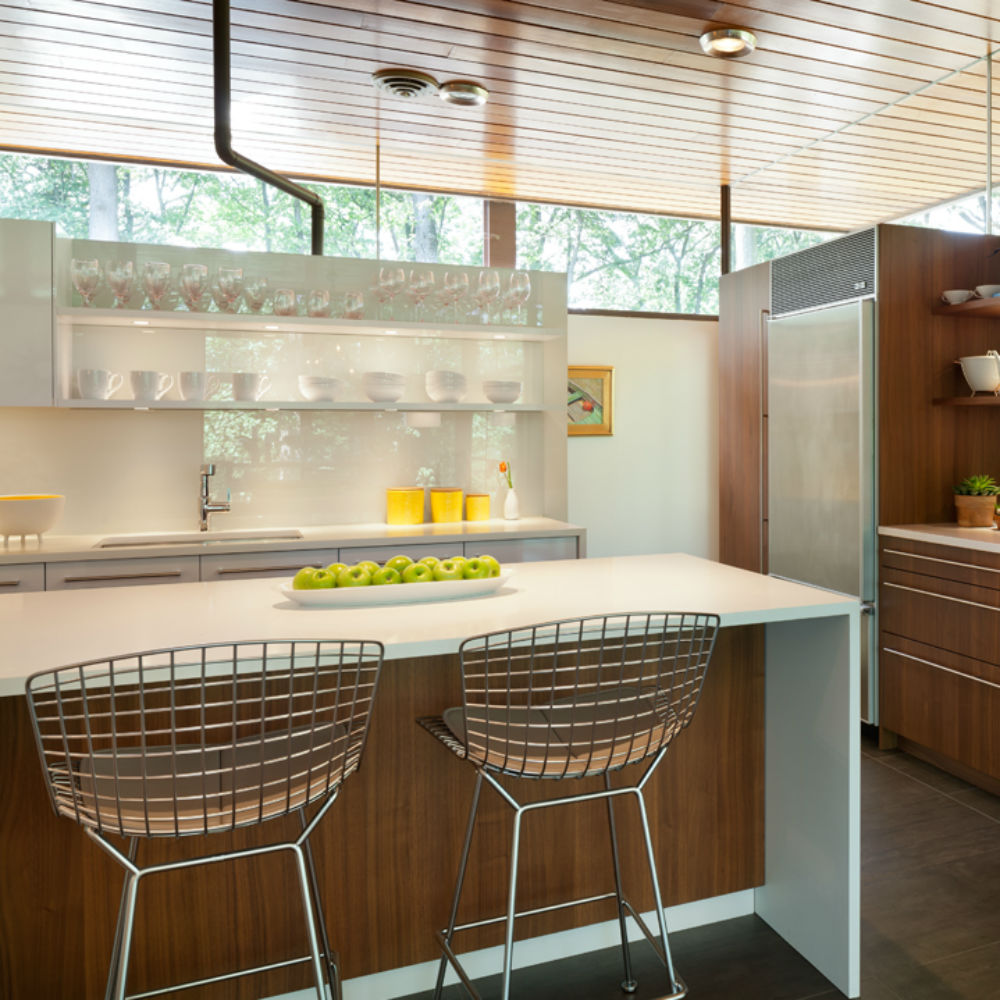 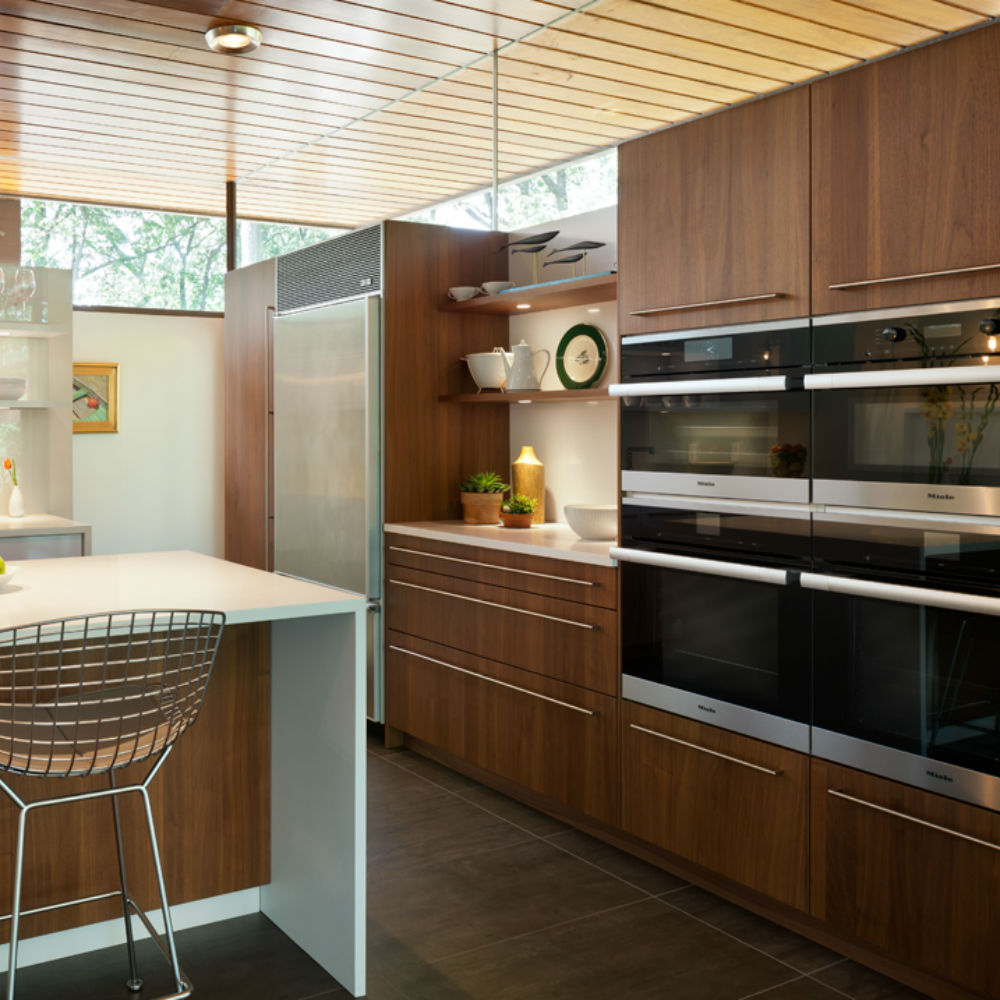 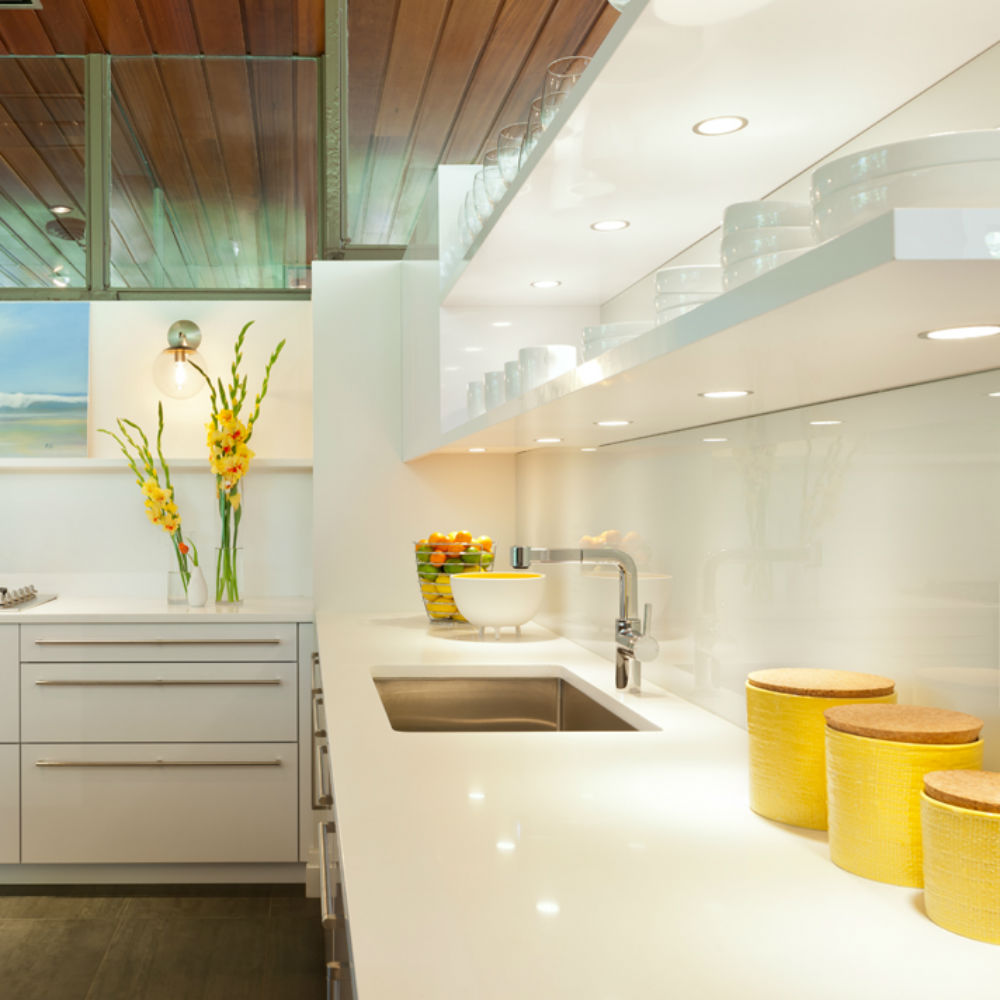 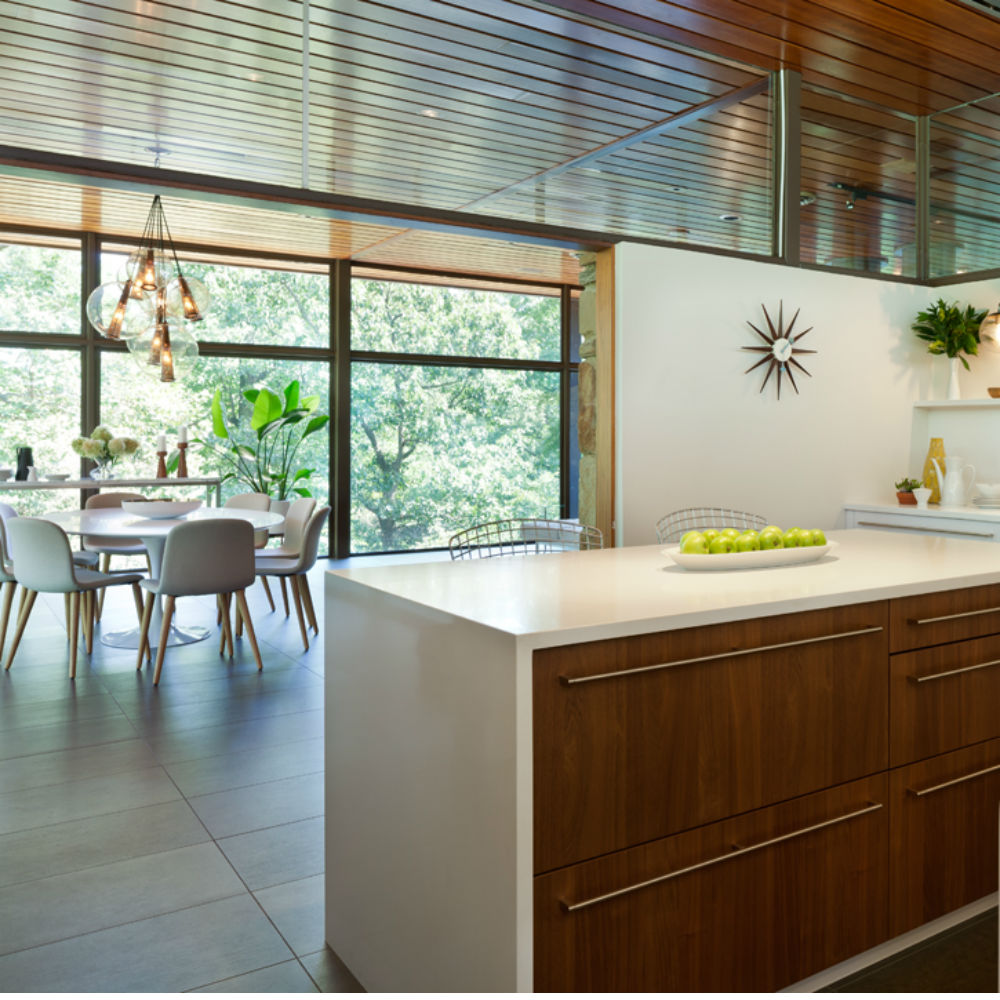 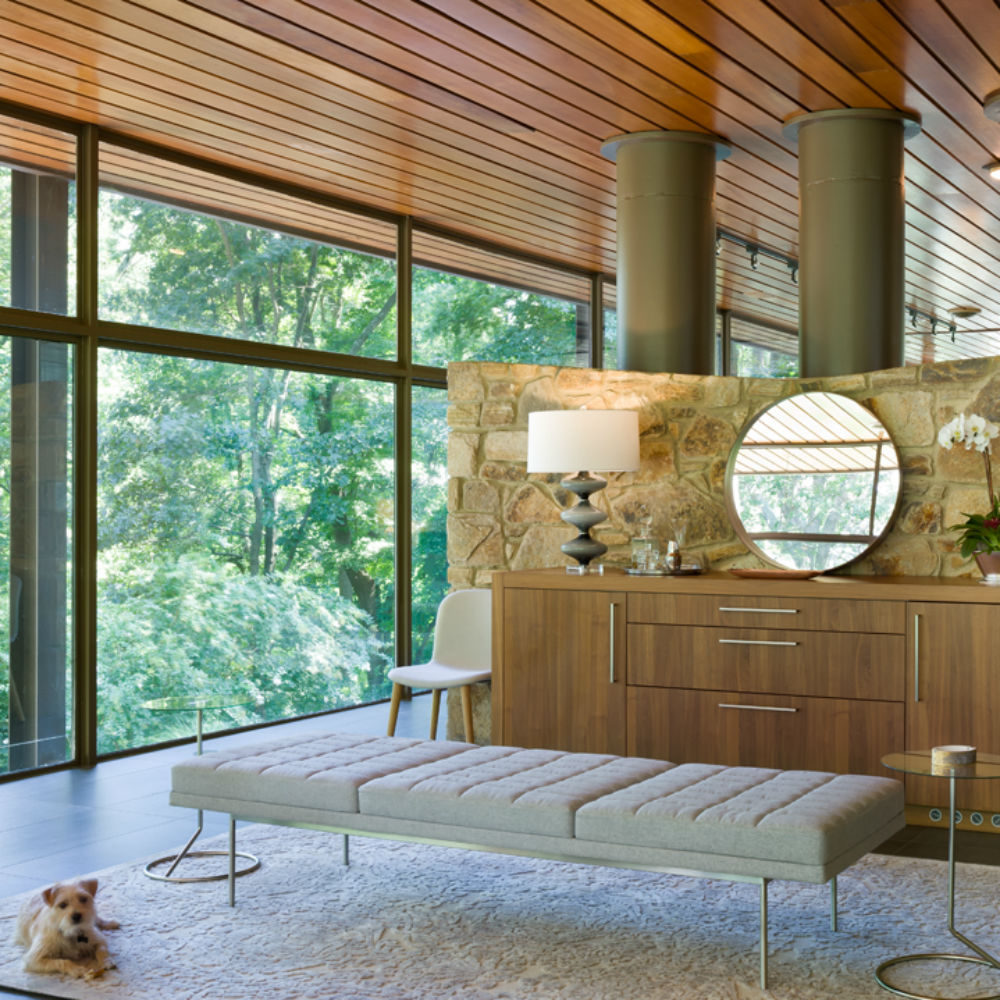 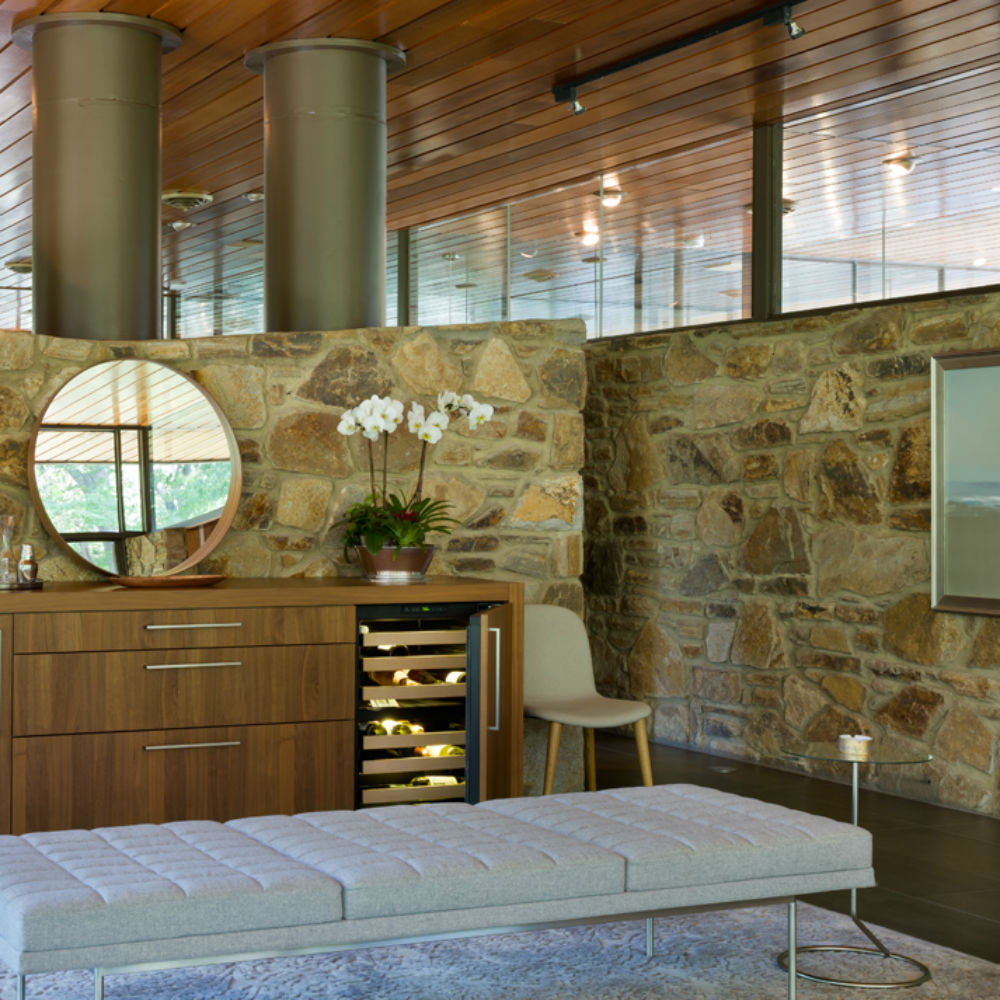 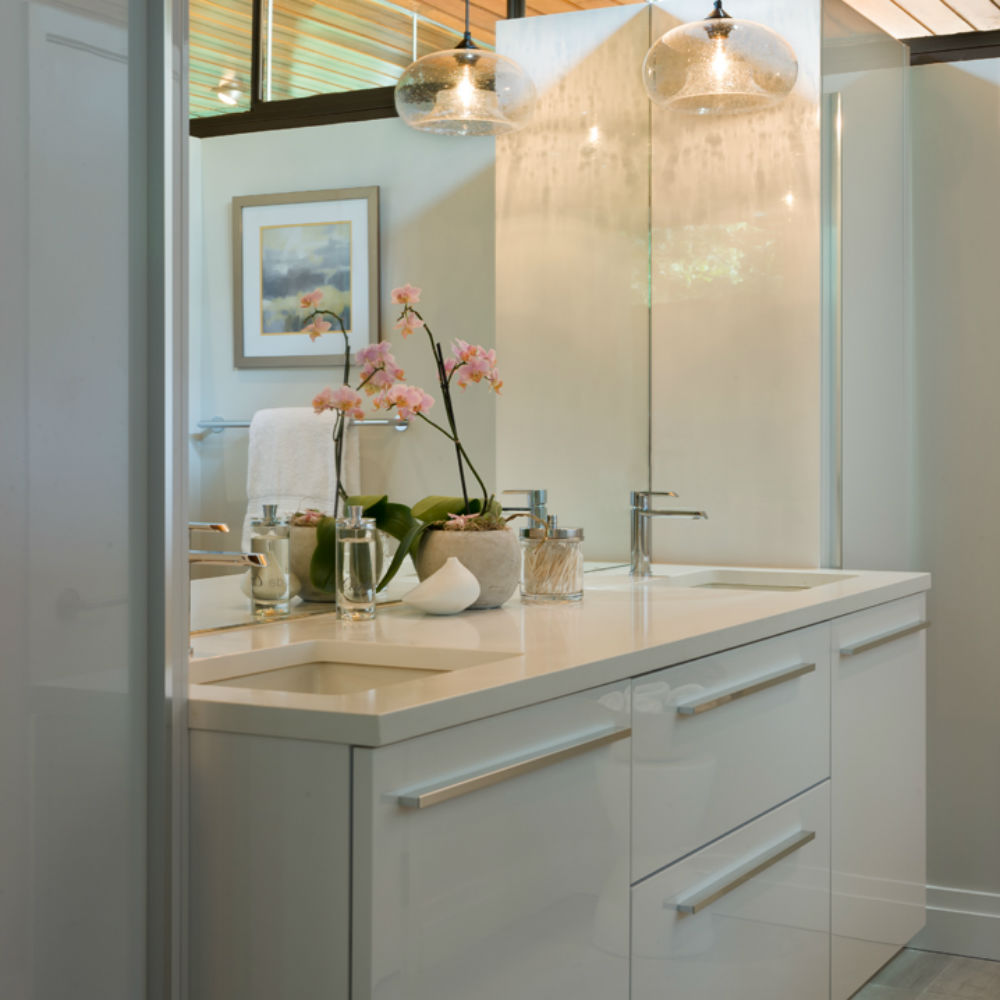 Before he built the Alley Theater in Houston or the Harlem School of the Arts in New York City, architect Ulrich Franzen designed residential houses. His designs featured clean lines, single levels, sliding glass doors and light-filled spaces. One of these homes is on Gibson Island, Md., and remains unique in many ways.

“This midcentury modern home was originally designed for an executive at Bethlehem Steel [a former industrial manufacturing leader],” said Shawna Dillon, principal designer at Alexandria, Va.-based Snaidero DC Metro. “The house is located in a secluded wooded area and is one of the only contemporary houses on the island – certainly the only one of its kind.”

The Challenge of Respecting History

The clients wanted to maintain the integrity of the 1962 design while opening up the house to the surrounding landscape. The home also needed modern upgrades, like an expanded kitchen and a reconfigured layout.

“When the house was built, kitchens were second in importance to the public areas of the house and were considered more service areas rather than places you wanted to spend time in,” explained Dillon.

The first step in opening up the kitchen was to move a main wall back two feet to make room for an island. This small but significant change allows for gathering space and seating around the island and establishes the kitchen as one of the main areas of the home, along with the living room.

Even with all the changes going on in the house, one major aspect of the original design was maintained: the extended ceiling. All of the interior and exterior walls are just at seven feet tall, and then glass extends another three feet up to a mahogany ceiling. With this design, one can stand at one end of the house and see the wood ceiling all the way through to the other side. According to Dillon, it was difficult to maintain this look while updating the home.

“It was challenging to maintain an 82-in. height on the cabinets, especially considering that the refrigerator was 84 inches tall,” said the designer, explaining that the original cabinet layout allows the refrigerator to extend two inches above the adjacent cabinetry. “We brought the tops of the cabinets up in front of the glass frame, which gave us the extra two inches we needed without blocking the glass.”

Also hindering the open ceiling was a large professional-style, double-vent hood the previous owner had installed. Within the airy design, the steel chimneys were huge eyesores.

“The client was anxious to remove it, but we were also concerned about what kind of holes and damage would remain in the ceiling,” said Dillon, explaining that the contractor had to patch and refinish the two holes left with new wood to match the rest of the ceiling . “They now can enjoy proper ventilation while having a totally unobstructed view along the ceiling line.”

While the height of the kitchen was fixed, the two-ft. expansion created more problems. When the sink in the kitchen was moved back, the plumbing chase – or a wall with interior piping – was exposed going up to the ceiling. It had to take on a new shape to accommodate the extension, and while Dillon considered several ways to cover it up, in the end the piping was left exposed.

“I think it adds some nice industrial character in the house and probably disappears more than it would have had we tried to conceal it,” she said.

It’s All in the Materials

The client was very passionate about restoring the home and honoring the original details, but an upgraded look was essential. For the kitchen, Dillon chose a mixture of glossy laminate cabinetry and light walnut matte wood. This was to balance out the dark mahogany wood ceiling

“The white gloss cabinetry with the white Caesarstone and glass backsplash work so well in the kitchen,” said Dillon, adding that the walnut accent cabinetry also helps lighten the room while giving a nod to the original mid-century casework. “The reflective surfaces help expand the limits of the room, mirroring the beautiful outdoors back into the interior space.”

Although pendant lights arguably would have furthered the interior lighting, there were concerns that they would compete with the contents of the open shelving and make the kitchen appear cluttered. But without pendants, the design team was concerned that the overhead lighting would not be enough to keep the room bright.

The solution was to add some decorative sconces on the wall above the cooktop. With the sconces and the LED lighting built into the cabinetry and shelving, the perimeter of the room retains its brightness, and the area has even lighting.

“I’m in love with how everything came together as a whole on this project,” said Dillon. “Nothing stands out to demand your attention or interrupt how you view the space and the surrounding landscape. It is all very cohesive and complementary, as if it was placed there by nature.”